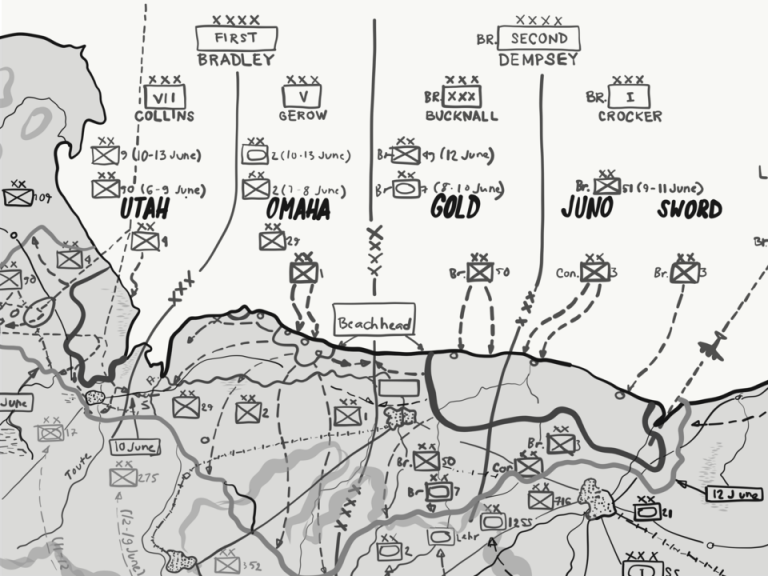 About 75 years ago, the morning of June 6, 1944, 156,000 men were on their way to some beaches in French Normandy. Operation Overlord had begun. During the night thousands of paratroopers had landed inland, to fight targets that threatened the invasion force. Europe had suffered from Nazi occupation for several years and a free and democratic continent was not a something you could take for granted. People who believed in another way of living had gathered for several years to end the oppression once and for all. Operation Overlord was high risk and a failure would have catastrophic consequences.

Years of preparation, education and planning would ultimately be tested in reality. Thousands of young men knew their task and it was far from certain they would get to see the sunset again. It’s hard to imagine their thoughts and feelings when they sat in different ships, heading for one of the beaches called Utah, Omaha, Gold, Juno and Sword.

The soldiers had already had a briefing of the maps and training on their specific tasks, on maps where all towns were removed. This was because the invasion’s exact landing points should not be revealed to the enemy and cause a disaster. Some of the units did not find out where they were actually going, until they were on the ocean.

The illustration above is just a schematic view of the overall strategy. The Allies had devoted years of intelligence and planning work to obtain detailed maps that formed the basis of the material from which the individual units originated. A huge amount of information was compiled in the form of strategy and transfer maps for each device. They were an important tool for the soldiers to overlook and understand the chaos they were thrown into, when the gates were opened on the landing boats.

That each individual knows what context he is in and what task he has to solve, is an important part of a strategy. A perfect thought out plan is always affected when it meets reality, but when each individual knows the higher aim of the plan, individuals can make agile initiatives to solve the tasks ahead.Even if that initiative does not lead 100% right, the process is driven forward and you keep moving.

To visually explain the strategy gives a direct access to the individual’s image memory. One can convey strategy and tactics in a manner that allows people to get the overview they need to solve the task. You can show in the picture the known dangers and possible hazards, the movement that is to be done individually and as a group, the mutual relationship of the different parts and the overall objective.

Afterwards, you need to collect new information to update the situation. This allows you to adjust the strategy after it has been exposed to reality. To show changes and reversals is the fastest way of visually describing the changes for those who are going to perform them, even if it’s just a quick drawing of a stick on the ground to explain the new situation.

Military strategy has almost always been visual. They know that one of the fastest ways to reach an understanding of what one wants to implement is based on a common visual language, where units and relocations have their own specific symbols to communicate their tactics, strategy and goals quickly to the most effective way.

So when your strategy needs to be clear and agile, understood by everyone – go visual.

The impact of visualization

Login to Business Design Studio
Reset Password
Enter the username or e-mail you used in your profile. A password reset link will be sent to you by email.